The LaHave and District Fire Department was founded at the end of WWII. The idea for the department came during the last years of the war. A Government sponsored program known as "ARP" or Area Response Patrol, was the watchdog when the German "U" boats were a threat along our coast. Communities patrolled, using the eyes of the fishermen and coastal boats to watch for suspicious activity. In LaHave, E.H. Himmelman took the idea a little further and obtained equipment from government surplus. The equipment was available if a community could find a place to house it. E.H. talked a neighbour into loaning a riverside garage for the cause. A surplus army truck and a trailer pumper were supplied by the government. This was during the last few weeks of the war and the fire department set out to organize and find members. This took place over the next year with the department coming into official existence during 1947. This equipment served the department until 1952 when a front pumper tanker was purchased.

The fire at the Boehner's Woodworking Ltd. on July 24, 1946 resulted in a loss of over $100,000 and left 86 men out of work. The fire started from an overheated electric motor, and due to the nature of the material in the vicinity, it spread very rapidly. So quickly did the blaze spread that three men in the upper part had to leap out of a window. Two of the men, Bedford and Fred Boehner, were injured.

The fire destroyed the main factory and two warehouses, containing work made up and ready for delivery. Several piles of lumber in the vicinity were saved from destruction. The Bridgewater firemen, with the pumper, responded to an appeal for assistance at 4:45 p.m., and remained on the job until around ten o'clock, when they returned to town. Another pumper, operated by the men at the mill, assisted the Fire Department, and their combined efforts were instrumental in preventing the fire from getting at the residences situated nearby.

This was the second fire at then Boehner's business. In 1912 the old plant on another site was demolished. 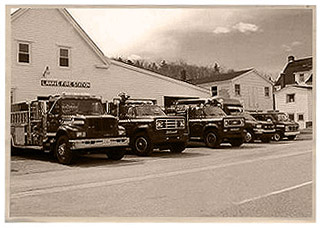 In the mid 60's the group moved out of the riverside garage to the current station opposite the ferry landing in LaHave. This building was the former temperance hall.

During the early years of the department a group of community citizens was formed as a steering executive or "Fire Department Commissioners" as they were known. They were comprised of people from Crescent Beach, West Dublin, Dublin Shore, LaHave, Pentz, West LaHave, and Mount Pleasant. This group would meet to handle the finances of the Department which from very early on came from tax levies on each property. In the mid 80's this expanded to include the LaHave Islands. They cover the drivable parts of the islands but have found it necessary to acquire a rescue boat during the past few years to cover areas without road access and do marine rescues.

During the 50's and 60's membership was low, however they boosted the roster with what were called sea going members. At any given time we would have some members away on boats while others were on leave so it balanced out.

Training was sparse and consisted mostly of equipment familiarization. BA equipment was not available until the late 60's and early 70's and fighting fires was done from a distance.

For the past number of years the department has trained members in Medical First Response.

The Department's Crest was designed by Angela (Mulock) Mitchell and the original painting is still on display at the Fire Station.